“I would say the number one thing we hear the most is, 'I really wish I could have come to you earlier,'” Katie Knook, an Elder Care Coordinator at Bratton Law Group, said. In her role, Katie works to serve members of the roughly 50 percent of U.S. seniors over the age of 65 who need some sort of long-term care plan. The great majority of these seniors are not prepared before a diagnosis. This reactive approach is hard, both emotionally and financially, for the patient and their families. Peggy McGarrity is a daughter of a parent with dementia who proactively planned for her long term care. As a result, Peggy's recognizes the vital nature of being proactive instead of reactive planners for the future.

Planning Proactively for a Dementia Diagnosis

What is the difference between planning for a dementia diagnosis proactively v.s. reactivity? The difference could mean $357,00 over the course of a person’s lifetime according to the Alzheimer’s Association, which is a 57% increase from 2010 data. Long-term care costs are on the rise and the only way to beat them is to plan.

“I would say we just have more of an appreciation for the fact that you do have to plan ahead. One of the things that I recommend people do right when they get a diagnosis is have a healthcare power of attorney and a financial power of attorney,” Peggy McGarrity, whose mother was diagnosed with dementia in 2012, said. 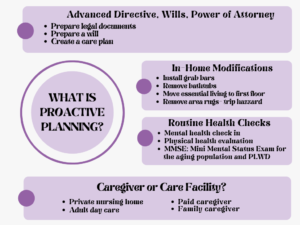 Dementia is a non-curable disease that only progresses and requires more and more advanced care as time goes on. If individuals are not planning to have dementia, will they be able to afford the costs if they do end up needing long-term care? This care often involves paid in-home caregivers, assisted living communities and nursing home care.

In the United States, 50 percent of seniors over the age of 65 need some sort of long-term care. According to wacaresfund.wa.gov, “Seven in 10 of us will need long-term care during our lifetimes, and most older adults today end up relying on family members to care for them or impoverishing themselves to qualify for Medicaid.”

According to the website, Medicare.gov, people diagnosed with dementia and their families “pay 100% for non-covered services, including most long-term care.” Most long-term care is not medical care. Instead, most long-term care helps with basic personal tasks of everyday life, sometimes called "activities of daily living." There is no option for in-home care with Medicare though. In order to be eligible, the person living with dementia (PLWD) must have depleted their savings and have no property left in their name. 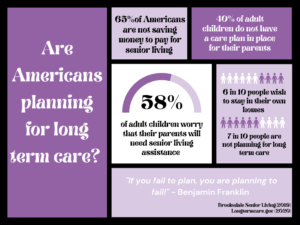 Dementia was first discovered in 1906, though modern research on dementia began in 1970. By comparison, cancer dates back as far as 3000 B.C. and has been the subject of significant research since 2012. Unlike cancer, dementia as a terminal condition has suffered from limited awareness and advocacy as a whole.

With limited awareness and little government funding support, dementia will continue to be the most expensive disease for private citizens and governments around the world. Most people give very little thought to what effect dementia later in life could really cost them physically, mentally, and financially. The cost not only hits the pockets of governments and people living with dementia, but it also hits the pockets of their family and friends who serve as their unpaid caregivers.

“That's a lot to ask of someone, a family member, especially, if they're caring for another family, their own family, children, whatever,” McGarrity said.

She continued, “I felt like [my mom] needed that professional oversight. And the people who are trained to know how to deal with the anxiety of sundowners*... [They are] a full-time job that I personally could not have done because I have my own family. So, the long term care insurance was a godsend. And yes, not a lot of people necessarily have that, but I will certainly consider it.”

Sundowning*— restlessness, agitation, irritability, or confusion that can begin or worsen as daylight begins to fade—often just when tired caregivers need a break. Sundowning can continue into the night, making it hard for people with Alzheimer's to fall asleep and stay in bed. From the National Institution on Aging.

McGarrity’s mom knew the importance of pre-planning. Her mother said, “I don't want to be a burden on you guys.” 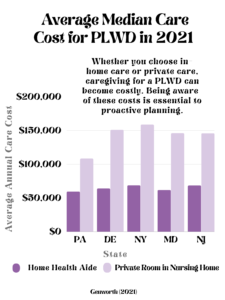 Peggy realizes now that her mother’s instincts were spot on.

The yearly national average of long-term care costs are from $20,280-$108,405 (see graphic 2). Without planning for these types of costs a PLWD or their family can expect to spend any saved money from the PLWD, as well as selling assets like houses, just to pay for long-term care services as the disease evolves.

Individuals who proactively develop a financial plan for their long-term care for themselves or for their loved ones can end up feeling a lot more secure when they are faced with dementia care costs.

“We were able to get [our client] into memory care assisted living. She paid the 24-month private pay requirement and is now living happily in the same room in the same assisted living facility,” Katie Knook, Elder Care Coordinator at Bratton Law Group, said.

Knook’s client already had trusts for her house and some money saved, with extra to pay for a private room in an assisted living community. This is because the client had planned for long-term care earlier in her lifetime. 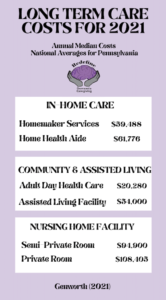 Sage Care Advisors assists families looking for direction and support when planning for a possible dementia diagnosis or long-term care. Sage is staffed by a team of social workers with extensive knowledge in senior needs. A Sage care advisor helps clients find service providers, attorneys, and other resources to include in a care plan.

Seniors who have thought about planning for long-term care later in life often invest some money into a long-term care insurance package. Long-term care insurance can vary in price and also in the total amount claimable to spend on care. This type of insurance may be  included in a special benefits package from an employer. Unfortunately, buyers beware. There have been 83 long-term life insurance companies that have filed for bankruptcy since 1991, leaving their paying clients with no support after the filing is approved.

“[My mom] got the Cadillac of long-term care insurance to the point where by the time that we started collecting on it, they were all like, ‘Wow, they don't even sell this product anymore,’ because there was no cap there,” McGarrity said. ”It basically was like, ‘You get this money when you get this diagnosis and you have it as long as you need it,’ which is kind of unheard of now, because they realize that like, oh my gosh, this could be really expensive.”

Paying out of pocket for dementia care can be expensive, especially when no long-term plan is in place at all. When speaking to senior care advisors like Sage, they can refer PLWD and those proactively planning, to services that can help them further plan. 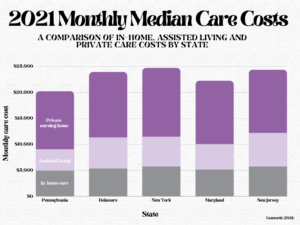 One business Sage would refer their clients to is Bratton Law Group, which is staffed by elder care attorneys who can help clients plan for long-term care and plan for Medicaid. Bratton Law’s services help families plan for the legal aspects of living with dementia, as well as planning financially, even if their plan is to save all their assets and money to pass along to their family.

Sage also may refer clients to a company like The Tender, which is a non-profit organization that helps family caregivers get a break and have a support group to communicate with about dementia caregiving. The Tender helps caregivers and PLWD secure federal and state grants to help pay for the services of Adult Day Care that The Tender provides.

With that being said there are still many roadblocks to planning for - and living with - dementia. For example, companies like Sage and Bratton Law Group are not covered under insurance or Medicare. There are no free services that help a PLWD plan before or after their diagnoses for the financial challenges of their care. No services like these are covered by government programs either, and without these services, it is difficult to proactively plan.

There is, however, a program looking to address these roadblocks to proactive planning. It’s the WA Cares Fund in Washington State. The state has recently established the United States’ first social-insurance program to help pay for long-term care.

Beginning January 2022 all residents working in Washington State will pay $0.58 per every $100 of earnings into this fund. If self-employed, residents can opt-in to the trust.

Benefits start January 2025. Each person who is eligible to receive the benefit can access services and supports costing up to $36,500 over their lifetime. “Washington State is the first in the nation to develop a way to make long-term care affordable for all workers in the state as we age,” as stated on wacaresfund.wa.gov.

While dementia affects 50 percent of the U.S. population, many people fail to plan for its effects on their life. This failure to plan can have significant consequences. Peggy McGarrity’s mother was a planner. At a young age, she invested in a long term care insurance policy way before getting a diagnosis. Peggy has benefited from her mother's foresight. It removed some stress and financial burdens from the family. In this audio story, we hear from Peggy as well as from financial and senior care advisors who help caregivers like her get the support they need.